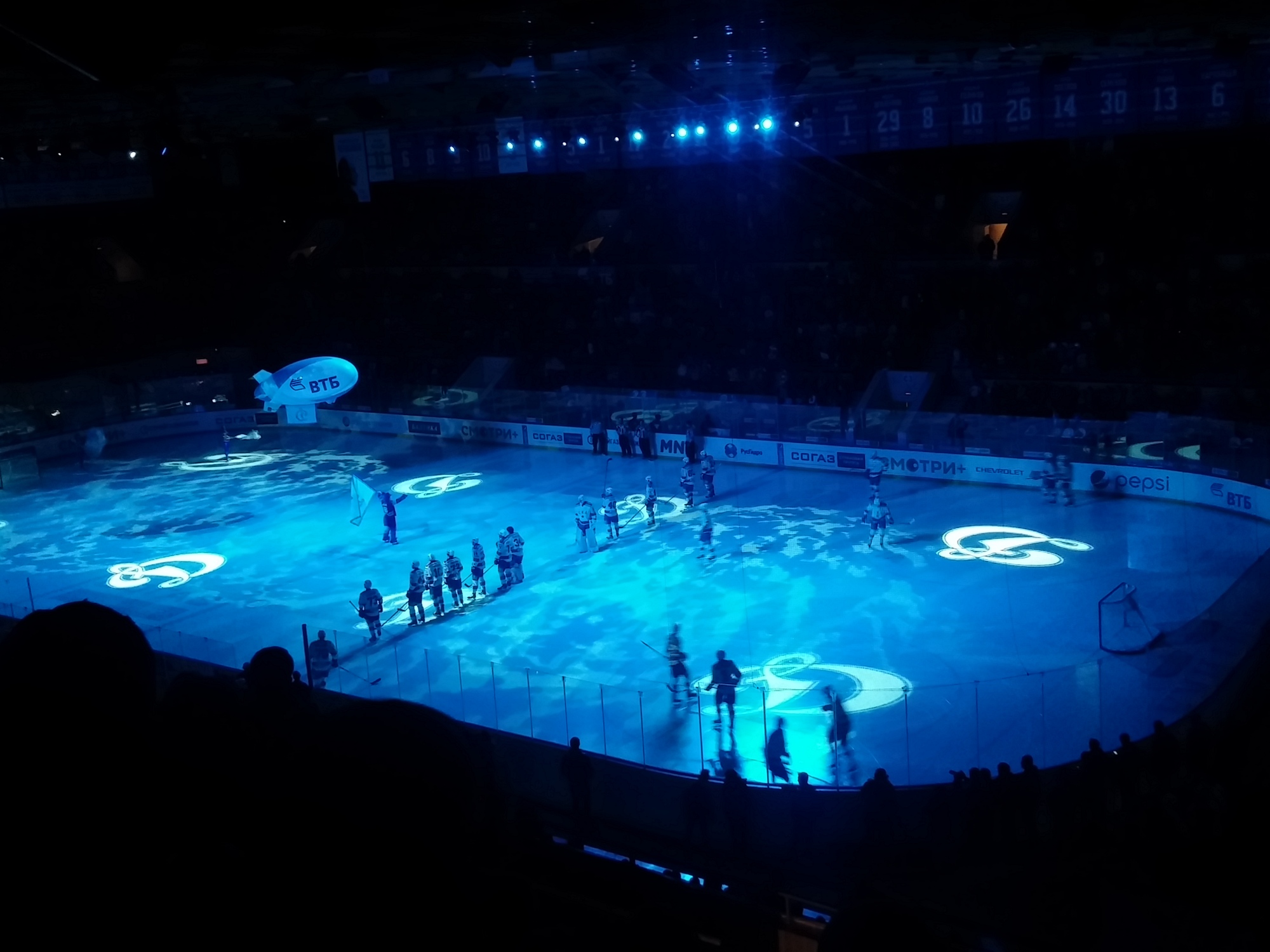 Russians are pretty good at hockey (understatement alert), and Dynamo Moscow has been champion in the league for the last two years running. In addition to that, they were playing their rivals- St. Petersburg, this weekend, so the atmosphere was bound to be lively. It was settled- we were going.

A team of us set out on Sunday night, to a stadium filled with people wearing blue and white. They cranked the music up- mostly 80s rock and a few 90s pop songs, cheerleaders danced on a platform or skated across the ice, drones with the logos of sponsors hovered over the rink, and the lights changed, choreographed to the music and the announcer’s booming voice.

We all stood for the Russian national anthem, which was belted out primarily by the supporters behind the goal, and then the game started. While the match itself was interesting- Moscow got an early lead in the end of the first period and then had to fight for it when St. Petersburg scored in the beginning of the third, causing the third period to devolve into a well-orchestrated scuffle until Moscow managed to get a power play and another goal five minutes before the end of the game- it was the people watching that was really fun.

People at all big sporting events are a bit mental, shouting, chanting, joining in a group mentality that otherwise tends to stay hidden under the surface. The crowd madly waved flags, chanted and hissed. One individual orchestrated the affair by standing on the barrier separating the spectators from the media, facing the crowd (how he saw most of the game, or if he saw most of the game is beyond me).

They delighted when people fell down- including a lightly clad cheerleader who was doubling as ice-clearer-away-er and one of the referees. The cheerleader had more grace about it- she got up and gave us all a wave and a laugh, the ref just looked seriously annoyed.

One man who was slightly apart from the group had the bizarre habit of standing up, sitting down and then almost bowing to the rink, kissing his cross and muttering to himself. When Moscow scored, he ran up and down the aisles and then started (I assume) a worm- which ended up being more of a penguin-slide along the aisle.

Others, like the man behind us, felt it was much more important to verbalise their feelings. It became an exercise to see how much Russian we could understand as he praised and cursed the players and the refs, questioning decisions, lamenting bad plays and generally gesturing wildly and shouting loudly. He was so upset at one point that he accidentally managed to hit me in the back of the head as he lifted his arms and stood in despair, something I found extraordinarily funny.

Definitely a good experience- even worth the crowded metro ride home, and I think several of my colleagues will be aiming to get some shirts or jerseys to join the fans when we go next time…

2 thoughts on “GOL! A Hockey Game in Russia”