The State Historical Museum looms over one side of the Red Square, red brick towers rising into the sky, unidentifiable for many western tourists. Facing St. Basil’s Cathedral, the impressive structure houses a variety of exhibits, special shows and historical facts. Unlike many of the other museums in Moscow, it is catching up with the tourism industry and not only provides some dual language signs to identify what the objects are, but also provides audio-guides in many different languages, for a small additional fee.

The museum itself is a historical museum, although I continuously misname it the ‘natural history museum’ because the exterior and the patterns remind me so much of the London Natural History Museum (a favourite of mine because of the dinosaurs and the annual Wildlife Photographer of the Year exhibition). This museum houses no dinosaur bones, however. It focuses purely on mankind, the evolution of civilization, the different icons, tools and remnants found across the former Soviet Union, religious icons, books and symbols, weapons and uniforms, and the life of the nobility from the 18th century. In fact, it seems to attempt to create a historical narrative and answer one of the age old questions: how did we get here? Its answers are coded silent objects and flowery walls.

Speaking of walls, this was one of the things that fascinated me the most- the museums walls were intended to echo the time period of the objects- the arrow heads and ancient pottery were displayed under murals of cave men in fur loincloths, the jewellery and careful carvings of elk, wolves and birds of pray were echoed in almost Celtic designs above the door frames, the rooms in which religious icons were displayed mimicked an orthodox church, with large domed ceilings. 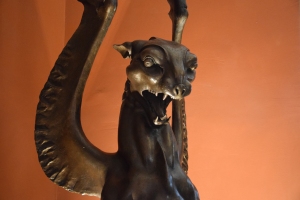 The diversity of objects was also breathtaking. Weapons included everything from arrowheads to cannons, swords, pistols and bayonets. Jewellery was made from iron, gold, jems, pearls, imported, styled, cut and placed carefully in ornamental patterns. Skeletons of people, heads, coats of foxes, lay or hung decoratively with little explanation. There were books, there were doors, there were stets of armour. There were paintings, there were sculptures, there were photographs. All of this crammed into two tall floors, created in a maze of rooms, steps and archways.

Although the bottom floor with its ancient burial rights and skeletons was quite interesting, I was surprised at the exhibits on the upper floor. It looked like we had returned to the UK. The clothes, the books and trinkets suddenly drastically overlap with the kind of things you can find in the Victoria and Albert. The jump that was made through Peter the Great is enormous and obvious, and probably the main thing what I will take away from this museum. The tsar single-handedly tried to re-write the manners, culture, styles and attitude of his people, and the westernisation is celebrated here.

History ends before the Soviet Union, though (I think there is a separate museum for this). The only memory you have of the days of the USSR is a stylish old Rolls Royce that sits behind a glass pane, hidden away from the main exhibits- Lenin’s favourite ride.

Tickets to the museum vary depending on age and student status. A standard adult is 350 Rub, a student is 100. Entrance is on the side facing towards the Kazan Cathedral, and is usually clearly identifiable through the number of people in historical costume loitering about.