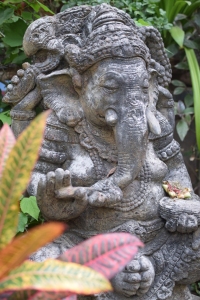 We made some bad decisions and so it took us three flights and an entire night to get from Ho Chi Minh City in Vietnam to Denpassar, Bali. Along the way we had a flight Kuala Lumpur and a poor night’s sleep on the concrete outside of a terminal in Jakarta, where the mosquitoes feasted on any exposed flesh. Tired and groggy, we arrived in Denpassar in the middle of the morning and began to suspect that our plan to drive half way across the island to the diving centre of Amed might be incredibly foolish indeed. Bali is one of the tropical locations where hiring a scooter is very popular among tourists, but is also technically illegal unless you have an international drivers licence. Not to mention that there are several stories of accidents with inexperienced tourists on the bikes, making poor decisions. It seemed we were in good company.

When we came through the airport we found two women waiting for us. Each of them had driven a scooter to the airport, as arranged via Bali Bikes, a rental company. We paid significantly more than if we had organised it on arrival, but we had good quality, well maintained bikes, and 24/7 assistance should anything go wrong.

Our first drive was uneventful, but required a lot of energy. Driving when tired always puts me on edge anyway, but I was particularly nervous on my small bike, travelling alongside large amounts of traffic and big lorries. We had a significant distance to go and in our tired and insecure state we made very, very slow progress. On the way up north we stopped to pick up my sister, a welcome relief from sitting on the scooter seat. We had breakfast at her hostel and caught sight of the ocean for the first time from a pitch black beach which bordered on a building that looked strangely like a boat, palm trees and several rice fields. 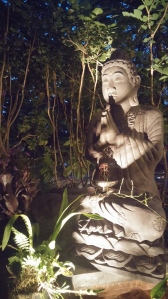 On the beach we found shells and pebbles, cuttlefish bones and worn down coins. Balinese people were also looking through the sand, searching for something unknown. After this small break we continued north, stopping several times along the way , first for a snooze on the beach at white sands beach, a novelty on an island where most beaches are black, and then at a roadside to buy mango and ice cream shortly before arriving in Amed. The journey was hot and the sun ferocious, but the views were stunning. Past the first row of houses and temples that lined the street you could see distant volcanoes, elaborate temples and far-reaching rice paddies. On our first day we had, in effect, had an overview of what was to come, and we were very excited.

There was an error retrieving images from Instagram. An attempt will be remade in a few minutes.