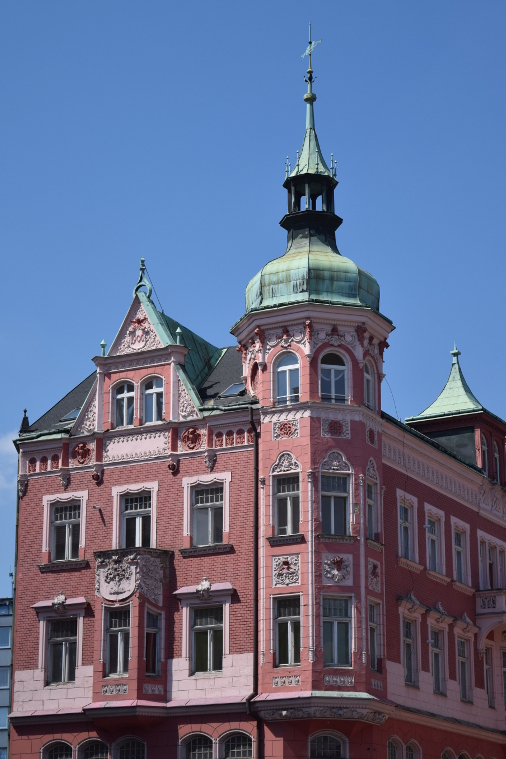 The Elbsandsteingebirge lies at the very edge of the modern German state, stretching out into the Czech Republic. After a day of exploring the sandstone pillars and cool forest paths on the German side, Mam and I got on bikes and took a tour up the river and across the border.

Our destination was Děčín , a town in north-west Czech Republic which had a colourful history before becoming part of an instrumental trade network between Prague and Dresden: it was once a strategic fortress and tried to be a ‘spa’ or bath town (rather unsuccessfully). Technically now a merger of two smaller towns, Děčín experienced 20th Century history in full, being annexed by Nazi Germany before also serving as a station for the Soviet forces. Known for its castle and baroque style buildings, the city attracts tourists predominantly for the architecture and grounds, which have been extensively renovated.

For us it was a convenient destination for a day’s cycle. Easy to navigate, the Elbe River Cyclepath took us from Bad Shandau to Děčín, a way which was largely long, straight and flat. We cycled past sandstone monuments, forests, small cleared fields with ponies and countless boats. Towards us came ‘traffic’ from the other side of the border- other individuals who had jumped on their bike or strapped on their roller blades to enjoy the sunshine and ‘pop over the border’.

I was interested to see the border, as in the EU I have gotten used to a solitary sign and controls are distant memories. What I noticed was that there is a distinct difference depending on which side of the river you are on. The main road runs on the ‘right’ side of the Elbe, carrying all freight and passenger traffic which is not taken by rail, which is on the ‘left’ side. The border is also a fair distance further north on the right side, so as you cycle along and look over you can see the traffic control and the border checks, and yet remain entirely unaffected by them.  When you do then cross the border on the left side, it is marked only with several concrete pillars. Freedom of movement prevails!

We had another gorgeous day and enjoyed the beautiful sunshine as we pushed into our pedals. For us, history was very noticeable: in contrast to the small, prettified Bad Shandau with many traditional looking homes, our first introduction to the outskirts of Decin was a series of concrete apartment blocks which signalled the towns administrative role in the region. Clearly this had been a far more populous area in the time of Soviet control, and an area more heavily developed for industry and transport. 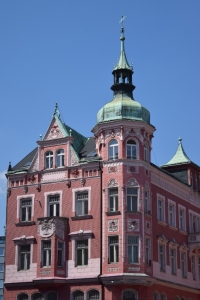 We had to cycle a few more kilometres (and further uphill!) before we arrived in the classic town centre. Across the river from our cycle path stood the large, white castle formidably high on a rock, overlooking the valley. On our side, even further up, some extravagant individual had built their own, more modest, fortress. We paused here to eat our lunch and have a small walk around before heading back. But before leaving the Czech Republic, we made the most of 40 cent ice cream- and had three scoops each while watching climbers make their way up difficult looking routes and a ferry head back and forth across the river.

Wanna have your own cycle adventure? We borrowed the bike from the Bad Shandau tourist office – there are other bike rental opportunities around as well.

2 thoughts on “A cycle into the Czech Republic”