My recent adventures have left me with short stopovers in two well-known German cities, Dresden and Bremen. I only spent a few hours in both, grabbing a coffee and my camera and wandering the streets, which made it difficult to write up full posts about them. Together, though, I think they might provide us with enough material.

Dresden I visited first, with my mama on the way back from our adventures in the Elbsandsteingebirge. Normally not city people anyway, the extensive time we had just spent outdoors made the city feel a little overwhelming.

We wandered in the warm sunshine and made our way down to the river, where there was a pleasant breeze. On the way we admired all the different buildings and artwork which tells of different political stories. First we passed the ‘Zwinger’ palace, now a museum, a building of history, pomp, and fealty. This led us to the grand opera house which was covered in colourful banners and a TV screen, calling for Open eyes, open hearts and open doors. This was a direct affront to the Pegida movement which meets on the square in front of the opera house each Monday for its demonstrations. Even as we walked along the old promenade, admired the ‘lemon press’ roof of the academy of arts and returned past the palace, immigration was obviously a key issue in peoples’ minds. The pianist on the Frauenkirche (Women’s church) square loudly sang ‘let it be’ and ‘all you need is love’ and the graffiti, placards and banners all spoke of a city divided.

While Dresden provided beautiful restored architecture (it also suffered heavily during the war) with a political atmosphere, Bremen seemed old and sleepy in comparison.

It was another day steeped in sunshine, and I had the pleasure of riding in a taxi with an old gentleman who quickly wrote me a list of places ‘I must’ go to. I bumped into him half an hour later and he even took the time to show me around, tell me a bit about the large statue of ‘Bremer Roland’ in the centre square, draw my attention to the frescos of the city hall, and give me some history of a city which flourished through trade.  This city screamed ‘old money’ and I enjoyed finding the more relaxed, but just as old Schnoor district. Here the houses and shops were less pompous, build side to side with small alleys and cramped passages. 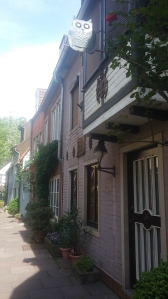 It now houses cafes and boutiques, small souvenir shops and restaurants, and is clearly also doing well.  If the rest of the city is doing quite so well I couldn’t tell. I left pensive: like the divided mind set in Dresden, the beggars in Bremen signified a clearly divided society, albeit this time along economic lines. The city didn’t feel so much like a fuse box, but the fact that it has its own problems was in no way disguised.

Still, the photographs show that these cities, with their contrasts and their problems, are still in many ways beautiful. And, as always, worth a second visit!

One thought on “German Cities: Dresden and Bremen”