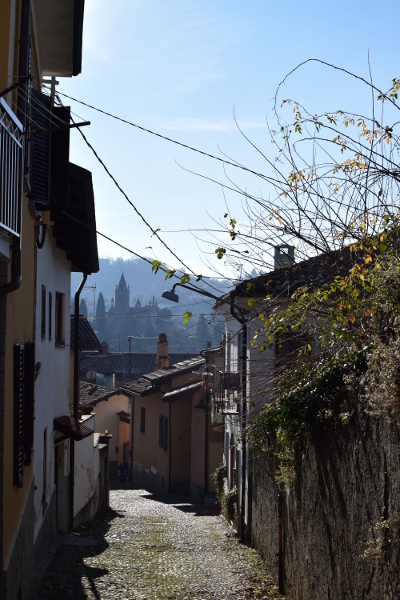 10 kilometres into a 15 kilometre walk I stood in front of a sign which reads “Rivoli, 10 kilometres”. 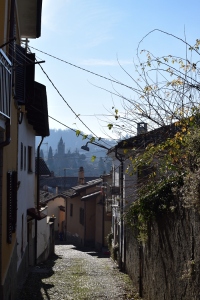 It was no mistake, I admitted to myself wearily. I had detoured, and detoured massively.

The plan had been to march from Avigliana to Rivoli, which was a very clear dotted line on my map, over a hill and along a valley. My path was less clear than I expected, though.  I found it without too much difficulty in the old town after admiring the tightly packed old houses and historical castle, but the path dissolved into multiple options on the way out of town. After winding its way up a hill with stunning views of Avigliana castle and San Michele Church, it turned to continue through a wood. Soon I felt pretty lost, and I wandered for several hours through thick leaves, checking and changing my path. The maps and GPS coordinates only helped to a certain degree and fairly often I was faced making choices with only little information. 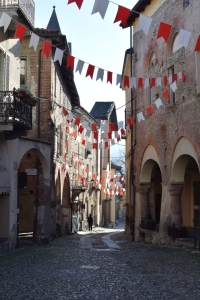 Signs disappeared and arrows painted on trees and rocks led in different directions. When the signs did reappear, they suggested I could go in three directions and still arrive at the same location.  Confused, I was pretty relieved when I arrived at an actual road, with a sign both for the path and a sign naming the town and reassuring me I was in the right location. Unfortunately it was not clear if the path continued on straight or turned left. After walking through the town for an additional 20 minutes, I now know that it was left. It was a very pleasant town, even if it was missing footpaths, and inhabited by people who enjoy driving at high speeds along small roads.

It wasn’t until I arrived on a bridleway, several meters wide and shared with countless mountain bikers, that I was finally sure I was on the right way. From this path I had stunning views of the surrounding countryside, the mountains behind a curtain of haze. Here the path was flat, wide, easily accessible, and I made much faster progress. Squirrels jumped through the fields, and in areas of shade I found tiny ice crystals and frost art. I got distracted by photo opportunities, and soon light was beginning to fade, and I began to get nervous. Even if I made it to Rivoli, the next train station was still several kilometres walk further along. Whether or not there were footpaths there were still unclear (and unlikely), and the prospect of facing cars in the darkness on the outskirts of town was not particularly appealing.

And so I stood, looking at the sign, sighing. It looks like I’ll have to try again. Perhaps this time I will try to walk in the other direction, and see if the path is easier to follow… 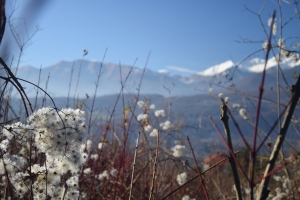